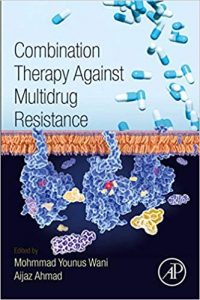 Combination Therapy against Multidrug Resistance explores the potential of combination therapy as an efficient strategy to combat multi-drug resistance. Multidrug resistance (MDR) occurs when microorganisms such as bacteria, fungi, viruses, and parasites are excessively exposed to antimicrobial drugs such as antibiotics, antifungals, or antivirals, and in response the microorganism undergoes mutations or develops different resistance mechanisms to combat the drug for its survival. MDR is becoming an increasingly serious problem in both developed and developing nations. Bacterial resistance to antibiotics has developed faster than the production of new antibiotics, making bacterial infections increasingly difficult to treat, and the same is true for a variety of other diseases. Combination therapy proves to be a promising strategy as it offers potential benefits such as a broad spectrum of efficacy, greater potency than the drugs used in monotherapy, improved safety and tolerability, and reduction in the number of resistant organisms. This book considers how combination therapy can be applied in multiple situations, including cancer, HIV, tuberculosis, fungal infections, and more. Combination Therapy Against Multidrug Resistance gathers the most relevant information on the prospects of combination therapy as a strategy to combat multridrug resistance and helping to motivate the industrial sector and government agencies to invest more in research and development of this strategy as a weapon to tackle the multidrug resistance problem. It will be useful to academics and researchers involved in the development of new antimicrobial or antiinfective agents and treatment strtategies to combat multidrug resistance. Clinicians and medical nurses working in the field of infection prevention and control (IPC) will also find the book relevant

GET IT FREE HERE

Sorry, the comment form is closed at this time.